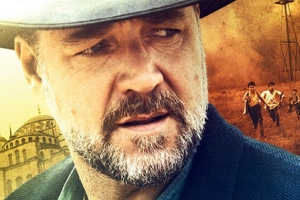 Australian farmer, Joshua Connor (Crowe) lives with his wife, Eliza (McKenzie) on a farm somewhere in outback Australia. Their sons had left years before, like many other young men during World War 1, to join the fight as Diggers overseas against Germany and it’s allies. Unable to cope with the tragic loss of all three sons who were reported missing-in-action, Eliza ends her pain, and commits suicide. Alone and stricken with grief, Connor decides to honour his wife’s wishes and travels to Turkey to find his sons and bring them home.

And so we follow the journey of an honest and honourable man, to a country bearing a culture that is far removed from Australian culture. With Turkey in political turmoil following the war, Connor’s task was never going to be easy. His presence at the battle field is initially unwelcomed by the British military who are examining the Gallipoli site. This quickly changes after a few words of persuasion from Turkish officer, Major Hasan (Erdogan), highlighting the fact that Connor was the only father to come looking for his sons. This unlikely aid from a former enemy, especially of such stature, is welcomed and appreciated by Connor. It isn’t long before he finds solace in his discovery. But where there is great sadness, exaltation must follow.

The clash of culture within the hotel where Connor stays while in Istanbul, soon dissipates when a friendship is forged with hotel owner, Ayshe (Kurylenko). They find comfort in each other’s company, and are drawn together through  commonality in their circumstances.

We have not seen Jacqueline McKenzie and Russell Crowe together in a movie since Romper Stomper. Their relationship in The Water Diviner is a far cry from the young lust crazed affair that Romper Stomper gave us.

The Turks suffered enormous casualties while defending their homeland. The ANZACS were the smallest contingent of the more than 120,000 fallen soldiers during the Gallipoli campaign. For every ANZAC that died from April 25, 1915 to January 8, 1916, nine Turkish soldiers died. The dead included: more than 80,000 Turkish soldiers, 44,000 British and French soldiers, over 8500 Australians and 2721 New Zealanders. Of course, war is unquestionably the most unforgiving act of humanity, but as Japan discovered during WWII, siding with such despicable evil does have it’s price.

Since it’s release on December 26, 2014, The Water Diviner has become the top grossing local film of 2014. It is shaping to become an iconic film joining a growing library of sensational Australian classics. It’ll definitely be on my DVD shelf.

The Movie Lad rates this: Four out of a possible five cups of Turkish coffee.