Carrie Fisher, the actor best known for playing Princess Leia Organa in Star Wars, has died at the age of 60.

Fisher died in hospital at 8.55am on Tuesday (local time) after going into cardiac arrest on a flight from London to Los Angeles on December 23.

Carrie Fisher was best known for portraying Princess Leia in the original Star Wars trilogy. After the pointedly ageing actress reprised her role as now – General Leia for The Force Awakens, she drew attention for her comments about sexuality during the blockbuster’s promo circuit. With massive support from social media, will Carrie Fisher see a mainstream comeback?

Carrie Fisher was Hollywood royalty, so it seems appropriate she was cast as a princess in her breakout role. Born in Beverly Hills in 1956, she was the daughter of singer Eddie Fisher and actress Debbie Reynolds. Fisher left Reynolds in 1958 for Reynolds’ best friend at the time, Elizabeth Taylor. Staying with her mother, Carrie Fisher made her first public appearance in 1973 with Irene, a Broadway revival starring her mother.

Later that year, Fisher enrolled in London’s Central School of Speech and Drama, attending for  a year and a half before moving back to America. In 1975 she was in her first film, the comedy Shampoo.

Two years later, when she was 19, Fisher was offered the role of Princess Leia. When asked how she got the role, she said it was by “sleeping with some nerd,” though she couldn’t remember which because of her drug use. In interviews during the early 2000s, she said she would have turned the role down, had she expected Star Wars to become as popular as it did. In addition to the film’s popularity, the character of Princess Leia was a celebrity on its own. With extensive merchandising, Fisher has joked that it was Princess Leia who became famous, and that she just happened to look like her. Also in 1977, Fisher began a romantic relationship with Paul Simon. 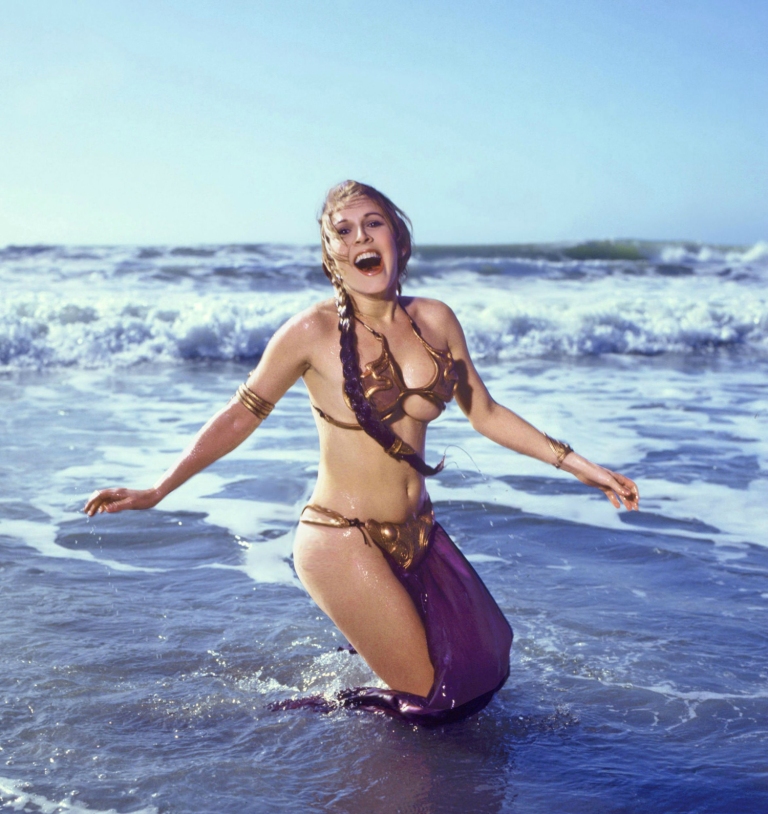 During the filming of A New Hope, Fisher cultivated her budding addiction to a variety of drugs, which was most evident in the made-for-TV movie, The Star Wars Holiday Special. Fisher is most known for her cocaine problems, but her habits weren’t limited to stimulants.

“Don’t eat acid,” she was told by Cary Grant, who would call Fisher after her mother contacted him, worried about her drug use. Grant had become the family’s drug expert after using LSD and other chemicals as a part of his psychotherapy in the 1950s.

In 1978, she appeared in multiple TV films, including a role as the love interest of Ringo Starr in his TV special, Ringo. She also hosted an episode of Saturday Night Live, notable for being the first episode to have a sketch about the Blues Brothers.

In 1980, Fisher performed in The Blues Brothers movie, credited as the “mystery woman” who vengefully pursued Dan Akroyd’s character. After Akroyd saved her life when she was choking on a Brussels sprout, in between filming, they got engaged. However, she left him once filming was over, returning to former partner Paul Simon. She also began to seek rehabilitation for her advanced drug addiction, after repeatedly being almost fired from The Blues Brothers. Fisher returned to the Star Wars saga for Episode V: The Empire Strikes Back later in 1980. With the first film internationally renowned, she and her co-stars appeared on the cover of the June 12th edition of Rolling Stone.

Simon and Fisher got married in 1983, and that same year, reprised the role of Princess Leia again, for Episode VI: Return of the Jedi. In Return of the Jedi, Fisher wears one of the most iconic costumes of any sci-fi film, popularly known as the slave bikini. Worthy of its own wikipedia page, the costume enabled Fisher to become a sex symbol for a while. 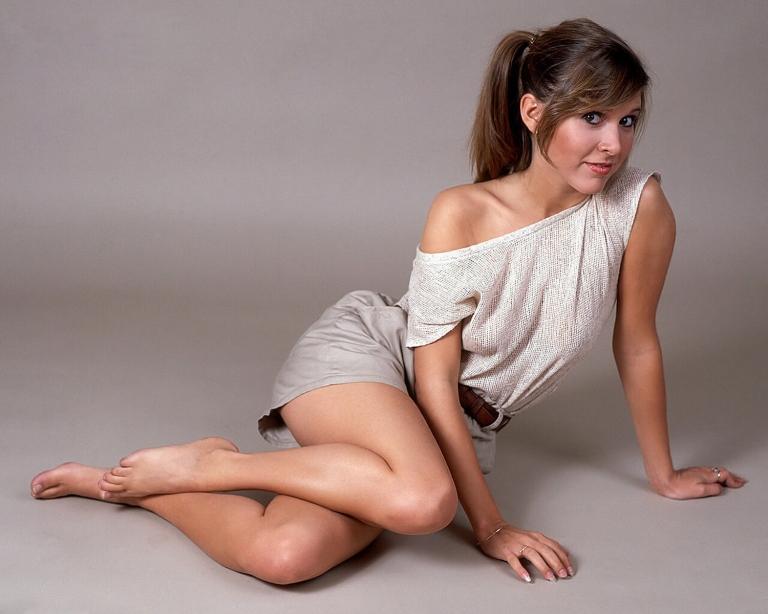 After the end of the original Star Wars trilogy, Fisher made appearances in The Man with One Red Shoe, The Time Guardian, and Hannah and her Sisters. After a prominent role in When Harry Met Sally in 1987, Fisher starred alongside Tom Hanks in The ‘Burbs. During this time, her relationship with Paul Simon ended, though they continued to date for several years after their 1984 divorce.

After The Return of the Jedi
Postcards from the Edge was adapted by Fisher for Columbia Pictures, who released a film starring Meryl Streep in 1990. During the 90s, Fisher published two more novels, Surrender the Pink, and Delusions of Grandma. Both books were semi-autobiographical. Surrender the Pink is seemingly about her relationship with Paul Simon, while Delusions of Grandma follows her relationship with Bryan Lourd, and subsequent pregnancy. Carrie Fisher gave birth to Billie Catherine Lourd on Jul 17, 1992, though Bryan left Fisher shortly afterward.

Through the 1990s and 2000s, Fisher had many small roles in a variety of works, many as some nod to her work with Star Wars. In addition to these public roles, she was also one of the most prolific script doctors of the era. Between 1990 and 2005, Carrie Fisher helped polish at least two dozen films, including the Star Wars prequel films.

After the success of Wishful Drinking, Fisher was very public with discussions about her problems with mental illness and addiction. She divulged that she had been diagnosed with bipolar disorder, and was using electroconvulsive therapy as treatment. A follow-up memoir, Shockaholic, was released in 2011, where she gave candid accounts of the effects of her therapy.

Carrie Fisher in 2016 – Recent Work & News
The first hints about Fisher returning to Star Wars came almost a year before the official announcement. In March of 2013, Carrie Fisher joked that she would return to the role of Princess Leia, though the claims of a Leia in a retirement home were quickly negated by her public representative.

In an interview in January 2014, Fisher announced her involvement with the next Star Wars film, returning the series with Mark Hamill and Harrison Ford. From March until the following October, Fisher lived in London for the filming of The Force Awakens. 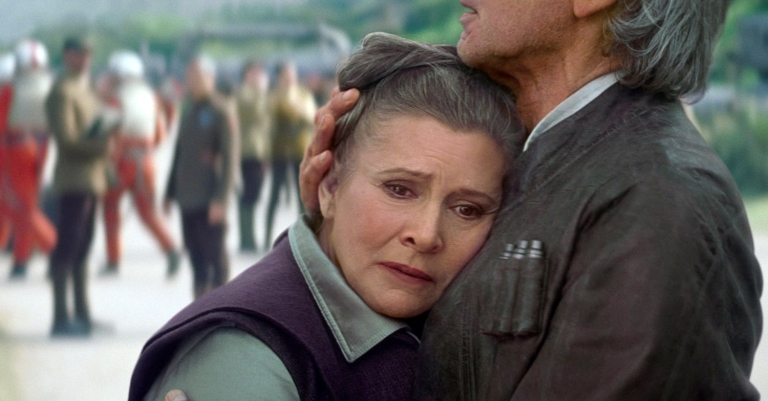 On December 18 2015, Star Wars Episode VII: The Force Awakens debuted. As the latest release in one of the highest grossing film series, the media buzz around the film was intense. Immediately, a lot of the discussion about Fisher’s involvement in the film focused around her appearance.

In Shockaholics, Carrie wrote “What I didn’t realise, back when I was this twenty-five-year-old pinup for geeks in that iconic metal bikini, was that I had signed an invisible contract to stay looking the exact same way for the next thirty to forty years.”

Since the release, Carrie Fisher has turned almost every promotion opportunity to highlight and criticize ageism and beauty standards in Hollywood. Speaking openly, she has caused a social media stir about her reprisal of the role. Most recently, Fisher used her Twitter to criticize the entire discussion, highlighting her discomfort with having her appearance treated as a separate thing from herself as a person.

Fisher, along with Hamill and Ford, were confirmed to be returning to the Star Wars saga for at least one more film, Episode VIII, set to be released in 2017.